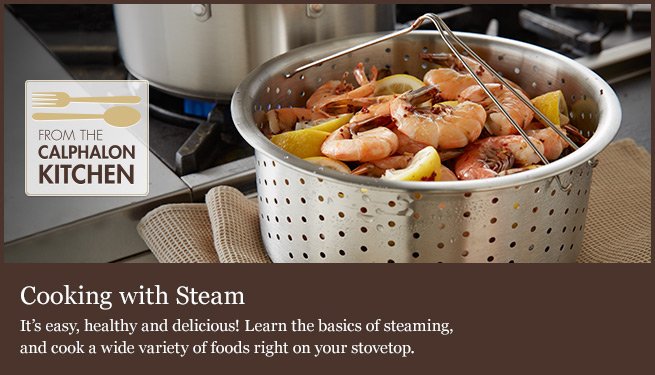 The maximum number of products that can be compared is 4. Please refine your selection.

Your session is about to timeout due to inactivity. Click OK to extend your time for an additional 480 minutes. 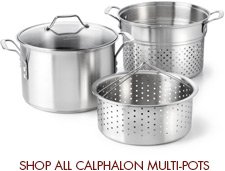 Steaming is a great way to prepare all kinds of vegetables as well as other naturally tender foods, including fish, chicken and shellfish. In fact, steaming vegetables maintains their beautiful color, shape and nutritional value better than other cooking techniques.

Steaming is classified as an indirect, moist cooking method in which foods are cooked by a vapor bath in a closed vessel. Steaming is actually a very simple technique: foods are placed in a special perforated steaming basket, and then positioned just above a simmering liquid such as water, broth or even wine. It’s important that the food does not come in direct contact with the liquid used to steam. The steamer is then tightly covered and the pan is placed over the heat source. The resulting steam, or vapor, cooks the food rather than the direct heat of the burner.

Successful steaming requires three pieces of equipment that fit snugly together: a pan or pot to contain the steaming liquid, a steamer basket to hold the foods to be steamed, and a tight-fitting cover to trap the steam in order to cook the food. 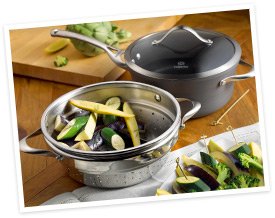 • Prepare food for steaming by cutting into uniform shapes and sizes to allow for a shorter cooking time.

• To enhance flavor, use herbs, garlic and aromatic spices to season the steaming liquid.

• Bring the steaming liquid to a boil before you place the food in the steamer, then reduce to a simmer.

• Add food to the steamer in a single layer, then cover.

• Keep the pan over moderate heat to maintain moderate steam. Liquids do not need to be at a rolling boil to produce steam. Rapid boiling will cause the food to cook too quickly.

• Avoid removing the cover of the pan repeatedly during cooking; each time you lift the cover, steam escapes and the temperature drops.

• Cook steamed foods until they are just done. Foods should be colorful, moist and tender to the bite.