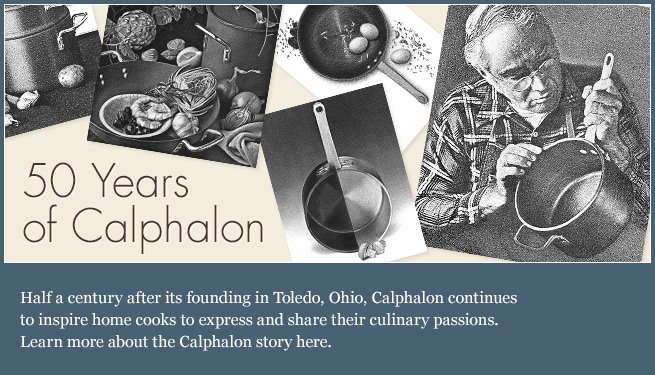 The maximum number of products that can be compared is 4. Please refine your selection.

Your session is about to timeout due to inactivity. Click OK to extend your time for an additional 480 minutes.

SKU:   CALPHALON_ARTICLES_21
Half a century after its founding in Toledo, Ohio, Calphalon continues to inspire home cooks to express and share their culinary passions.
Posted on July 25, 2013
Share: 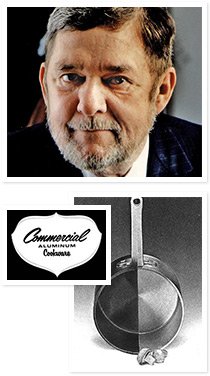 In 1963, Ronald Kasperzak, an executive in the metals industry, discovered a small manufacturing firm for sale in Toledo, Ohio that made aluminum products, including heavy-duty cookware for the foodservice industry. A lover of entertaining and fine foods, Ron decided to purchase the company and renamed it the Commercial Aluminum Cookware Company.

With a focus on commercial cookware, Ron immersed himself in the restaurant/food service industry and worked closely with distributors, dealers, and restaurateurs. Soon, the Commercial Aluminum Cookware Company expanded and improved their offerings, creating Epicure, high-quality cookware designed for even heating and fast response to changes in heat levels. This cookware line was perfect for commercial kitchens and the needs of professional chefs, and Commercial Aluminum quickly became a leading supplier of cookware to the foodservice industry.

The quest for innovation didn’t stop there. In the late 1960s, Commercial Aluminum adapted an electrochemical process used in the aerospace and architectural industries to harden raw aluminum. The process, called hard-anodizing, causes the aluminum to develop a hardened surface that is 80% harder than stainless steel. Ron applied this process to his cookware, creating a new line of professional-quality hard-anodized cookware, named Calphalon. 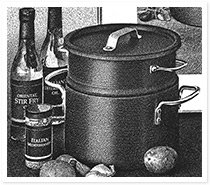 As its culinary reputation grew, Commercial Aluminum expanded Calphalon into the retail market, first selling in small gourmet specialty stores and cooking schools before successfully launching at Williams-Sonoma in 1976. Calphalon pioneered the “store within a store” concept when they launched at Bloomingdale’s in 1980, and followed with other national retailers soon after. With increased availability, home cooks were able to experience the superior cooking performance and durability previously enjoyed only by professional chefs. 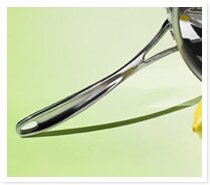 In the 1980s, Calphalon continued to focus on innovation as well as product design. Paul Angelo LoGiudice joined the company in 1987, eventually earning the title Director of Product Design. Over his 25-year career, Paul’s work led to many inventions and patents, including the "Cool-V" handle, the first-ever stainless steel cookware handle designed to stay cool on the stovetop. He made sure that each and every Calphalon product was approachable, while meeting consumer’s expectations for precision and performance.

Paul’s design influence was far reaching, and he helped lead the way as Calphalon expanded its portfolio in the coming years to include premium nonstick bakeware, utensils & gadgets, cutlery and kitchen electrics. 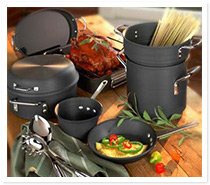 In 1993, Calphalon launches its first nonstick cookware line, Professional Nonstick. Designed to meet the needs of home cooks with easy food release and easy cleanup, it was also popular among cooks who wanted the ability to make healthier meals with little to no butter or oil.

As the company continued to grow, a landmark decision was made. In 1997, the Commercial Aluminum Cookware Company changed its name to the Calphalon Corporation, recognizing the strength and strategic importance of its leading product line. In 1998, Calphalon was purchased by the Newell Company, and joined a family of well-known brands including Levolor, Sharpie and Goody. The next year, Newell purchased the Rubbermaid brand, changing their name to Newell Rubbermaid. 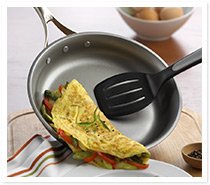 Calphalon entered the new millennium with a renewed focus on performance and superior design. In 2003, Calphalon launched Contemporary Nonstick cookware. Its modern styling and nonstick performance immediately connect with brides to make this a top bridal registry choice. In 2009 Calphalon introduced Unison Nonstick, one of its most successful product launches in brand history. Unison is Calphalon’s first dishwasher-safe hard-anodized cookware and delivers true innovation to the marketplace with its dual-surface technology. Pans feature either ultra-smooth Slide Nonstick for revolutionary release or textured Sear Nonstick to seal in flavor.

Today, Calphalon continues to bring excitement to the kitchen with an expansive collection of cookware, cutlery, bakeware, utensils and kitchen electrics. Calphalon can be found at a wide range of premium and lifestyle retailers including Williams-Sonoma, Macy’s, Bed Bath & Beyond and Target.

Recent innovations include the introduction of AccuCore Stainless Steel in 2012, cookware constructed of five metal layers with a copper core for controlled, even heating. In 2013, Calphalon partnered with Williams-Sonoma to launch Elite Nonstick, a premium line of technologically advanced nonstick cookware that is safe for use with metal utensils.

We’re proud of our history, our people and our heritage. It’s been five decades since the first aluminum pan came off the line in Toledo, and Calphalon continues to grow in its role as a leader in the culinary movement. We’ve played an important role helping cooks create amazing meals and share lasting memories since 1963, and we’re looking forward to many more years around the table.